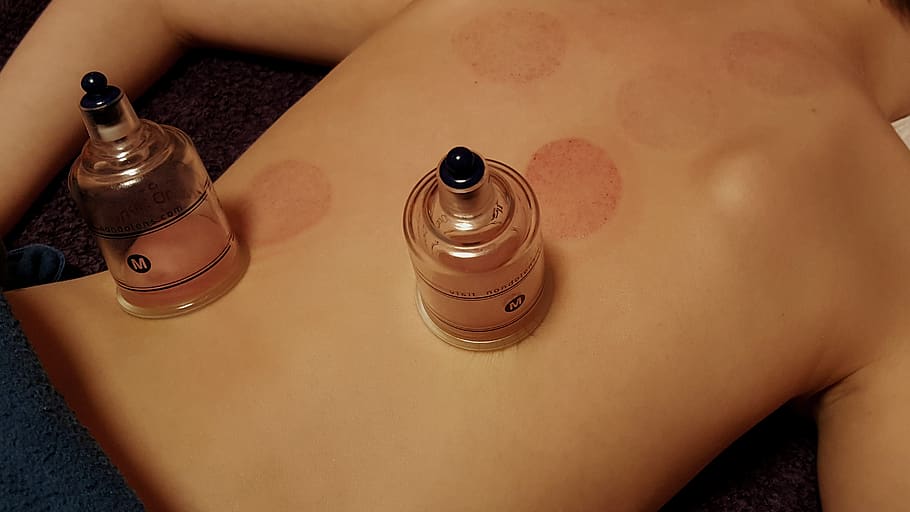 Cupping has become widely recognized in the Western world since US Olympic champion, Michael Phelps swam in the 2008 Beijing Olympics.  This curiosity in cupping was sparked when viewers saw Phelps soar through the water with red and purple circular cupping marks on his back.  Today, many use cupping for various muscular aches and pains, particularly back pain.  Athletes in particular utilize the benefits of cupping to accelerate the recovery process after strenuous training.  Although newly popularized, cupping dates to 281-341 CE during the Jin dynasty in Asia where the scholar, Ge Hong used animal horns to drain fluids out of the body.  This was known as the “horn method” where an animal horn was used to dispel pus.  In Arabic and Islamic countries, the cupping method was also used.  The Al-Qanun Fi’l-Tibb, Canon of Medicine (1025CE) mentions the use of cups or Hejama being used to treat menstrual conditions.  These methods of cupping have been passed down throughout the centuries, however, has recently become a healthy trend to Americans.

In Traditional Chinese Medicine, cupping warms and promotes the free flow of qi and blood in the meridians, dispels cold and damp, diminishes swelling and pain, according to Chinese Acupuncture and Moxibustion by Cheng Xinnong, one of most used textbooks. Clinically, cupping is mainly used to treat muscular pain, or “bi syndrome” caused by wind and damp obstructing the channels, resulting in back, shoulder, and leg pain.  The red to purple marks are the result of the stagnated qi and blood coming up and out through the skin’s surface.  Basically, the process of cupping involves the creation of suction which acts to pull the stagnated qi and blood out, and encouraging the free flow of qi and blood.

There are two methods of cupping commonly used today.  One is called fire cupping.  Here, suction is created by heating up a glass cup with a small flame and quickly applying the cup on the skin’s surface.  The other is called suction cupping.  In suction cupping, glass or plastic cups are placed on the skin and a suction pump is attached to the top of each cup, creating suction.  There are different kinds of cupping.  One is retention cupping where the cups stay stationary on the skin for a remainder of 20 to 30 minutes.  The other form is sliding cupping where oil is applied to the skin and the practitioner slides the cups up and down the skin’s surface.

Like all the treatment modalities of Chinese Medicine, cupping is an excellent form of therapy that has been used throughout time.  Today many rely on cupping for quick relief from debilitating back pain.  Others such as athletes depend on cupping, making them not only better athletes, but also protecting their bodies from injury.

The Renaming of the YSU Community Clinic: A New Name . . . The Same, Shared Commitment